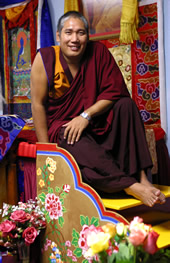 Za Choeje Rinpoche Tenzin Lobsang Dhamchoe was born in 1968. Rinpoche grew up on a small farm with his grandparents. The local village Lama presented Him the birthname of “Choejor Dhondup
(Accomplished Spiritual Abundance)”. As a young boy, Rinpoche discovered a love for Tibetan folk
tales and spent many hours reading ancient stories to elders in the neighborhood. His enthusiasm of
Tibetan literature inspired him to join the Tibetan Institute of Higher Tibetan Studies in Sarnath,
Varanasi, India in 1982.

A year into His studies, at the age of 16, His Holiness The 14th Dalai Lama recognized Him as the 6th reincarnation of Hor Choeje Rinpoche of Eastern Tibet. He was formally enthroned in 1983 as the 6th Za Choeje Rinpoche at Tehor Khamtsen in Sera Monastery. Under the guidance of His Holiness and Yongzin Ling Rinpoche, He received extensive training in the traditional Tibetan Buddhist method of listening, contemplation and meditation.

In addition to Rinpoche’s monastic training, He received hundreds of empowerments and initiations in the Vajrayana tradition from the great Masters Kyabje Lochoe Rinpoche and Kirti Tsenshap Rinpoche.
He also received the entire oral transmission of Kan-gyur and Ten-gyur scriptural texts from Master Kyabje Pannang Rinpoche. In 1997, Rinpoche joined Gyumed Tantric College to further his training of highest Yoga Tantra and its ritual practices.

Rinpoche came to the United States for the first time in 1998 to lead the Mystical Arts of Tibet Tour sponsored by Richard Gere Foundation. During summer semester he taught Tibetan Culture and Philosophy at Emory University, in Atlanta. Rinpoche was further invited to speak at many other universities throughout the country.

In 2001, Rinpoche, together with some well wishers and Dharma students, founded Emaho Foundation in Scottsdale, Arizona, where he currently resides. Emaho's main mission is to assist with individuals’ spiritual development, and to support humanitarian projects. Rinpoche has taught in the United States, Japan, New Zealand, and many other countries. His style of conversing, with laughter and openness, generates a comfortable environment for all people. One of most simple yet profound pieces of advice he often gives is “stop struggling against the struggles in life.” His unique skill of teaching, and his ability to apply these teachings into daily lives, has helped many spiritual practitioners throughout the world.

Together with co-author Ashley Nebelsieck, he wrote the book “The Backdoor to Enlightenment”, which is available in multiple countries and several different languages.

In 2006, Rinpoche made a historical visit to Tehor Region in Eastern Tibet. Thousands of people with 400 horsemen greeted him with a traditional welcome ceremony. The whole village filled with joy as they celebrated his homecoming with several days of picnic and dances. Although his main activity is teaching Dharma, Rinpoche also supports the Monastic and Lay community of the Zakhog region in Eastern Tibet. He travels extensively, teaching throughout the world doing humanitarian projects and supporting individual spiritual growth.

"Since I hold the title of ZaChoeje Rinpoche, it is my responsibility to look after the people of Tehor and give them guidance for their future and their children's future. Some of the monasteries in the Tehor region, that were founded by my previous, are rebuilt from the outside, but are still in need of much more work to make them complete. Healthcare in that region is severely outdated with common illnesses resulting in death or permanent damage. Educational facilities are sparse and many families are unable to afford to send their children to school. It is my goal to continue, as my predecessors have, to provide assistance to the people of Tibet, especially now in these difficult times when the future of Tibetan culture and heritage is on the verge of collapsing."

Here is a selection of photos (  Gallery 1 | Gallery 2  ) of Rinpoche through the years.
High resolution versions are available by request at mail@emahofoundation.org

Question and Answer with Rinpoche

Rinpoche is a spiritual leader of the Tehor region in Tibet. He represented his region in the presentation of the long life prayer to His Holiness the 14th Dalai Lama in 2005.

During Rinpoche's recent visits to Tibet he has been influential in creating a partnership with local officials and establishing social programs for the community there.

On occasion, Rinpoche offers a group ceremony of formal refuge to members of the sangha. He is also available to offer refuge on an individual basis.